Nigeria was designed as a recycling institution that only has a place for political hegemony. The system only enriches hoodlum politicians whose destructive interests are placed above those of citizens.

Rebranding of corrupt politicians has an effect on how the Nigerian system operates. People have been deprived of the dividends of democracy, and for long the oppressors always use divide and rule to deceive oppressed people.

Nigerian youth have been living with unfulfilled lives, and ahead of 2023 election, deception has been sold out for public consumption. Meanwhile, Nigerians have experienced the worse situation where they have been unable to accomplish their dreams.

The former Governor of Lagos State, Amuda Sangodele, popularly known as Tinubu, is a power-drunk man who is willing to do anything to gain everything. Despite the fact that Nigerians have not recovered from this current maladministration inflicted on us. We cannot afford as a country to be plagued by another impotent tyrant as Nigerian president.

Tinubu’s ambition is dead on arrival, he lacks capacity and competence to govern Nigeria. Someone who serves as a patron to “Agberos” in Lagos State. During his reign as governor, he gave these hooligans absolute power to run the affairs of Lagos people.

Under his watch, thousands of underaged children were out of school, they were on the streets roaming around and waiting for Tinubu’s orders to attack his critics and opponent who went against him.

Tinubu is a wicked politician, a desperate and shameless man who lied about his identity, also lied about his name, town, age and education. Everything about Tinubu is a lie! He’s a questionable character who escaped trial in the United States of America with forgery and drugs related offences. A desperate man whose conscience has been buried for long.

Tinubu can never be trusted with power, he betrayed Moshood Kashimawo Olawale [MKO] during NADECO days just to become a commissioner in Lagos State. He connived with dictator Abacha and ganged up against MKO.

Obviously, Tinubu is a greedy, heartless and clueless fellow whose interest, to him, is more important than the interest of Nigerians. His ambition to become the next president has been rejected by all sundry, except the mindless individuals who do not mean well for this country and want this fuddy-duddy to rule the country by all means. 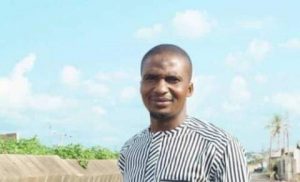 Imagine someone who came out publicly to announce that 50 million Nigerian youth should be recruited into the Nigerian Army, and they should be fed with cassava and corn. How then can any right thinking person choose this frail-looking humanoid as president?

Tinubu is a catastrophe who lied to Nigerians that dictator Buhari’s regime will pay N5,000 monthly for the unemployed youth and that they would be gainfully employed with three million jobs per year. After 6 years with his sugar-coated mouth, nothing to write home about.

Someone who singlehandedly sold half of Lagos to himself, privatised people’s properties and turned them to his personal use. Tinubu who graduated with a first-class degree in looting the state treasury is now aspiring to become Nigeria’s president. Never shall affliction rise the second time!

A former governor who failed to build a world-class hospital for people. Here is a man who always runs out of the country to Europe with taxpayers money to receive world-class treatment for the slightest headache after depriving Lagos with basic needs such as quality healthcare services.

Tinubu will only unleash terror against Nigerians if he makes his way to Aso Rock. He hid his real name and age and refused to tell Nigerians how he acquired his wealth. Here is a man with questionable credentials who is not bold enough to reveal his identity but desperate to rule the country by all means. This must never be allowed to happen!

He was part of the plot that masterminded the killing of innocent young people at the Lekki Tollgate on October 20, 2020. Tinubu is a destabilised politician whose conscience has been buried against humanity.

Over 200 hundred people were killed in Ogun State last week, but he was unmoved and unconcerned about the killings. Tinubu left his zone to hypocritically sympathise with Northerners yet he wants to use the South-West as a scorecard to win APC ticket.

Obviously, Nigerians have not learnt their lessons after years of a fruitless journey by the same heartless people that led us to where we are today. Same people with outdated ideas still want to rule us.

It is time for all Nigerians to reject all of the actors that involved in the killing of innocent protesters at Lekki Tollgate, including all other criminal politicians. Let’s unite and float a political movement. Let’s mobilise people across the country like we did during the #EndSARS protests. It is time to take back the country from these wicked people.