In the early hours of Thursday, the former governor of Imo state, Rochas Okorocha, was granted an interview by BBC News Pidgin about the forthcoming presidential election.

When the questioner asked him as to why the Economic and Financial Crimes Commission (EFCC) pressed charges against him the day he announced his presidential ambition, he explained the reasons saying, “the fact that they charged me the day I declared my intention should mean something to you. 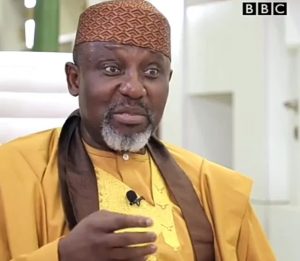 The money they charged me is nothing because I spend ten (10) million naira every day to take care of my children and that’s roughly four hundred million nairas (N400m) in a month.”

Rochas Okorocha explained that his children are the poor people in his state who he cares for. He said, “when I was a lead representative, I drew in the adolescents and ensured the destitution rate was diminished which was the reason frailty was not exactly influencing my organization. Hunger makes individuals consider conveying arms.”