During the visits, Sheihk Gumi offered cash gifts to vulnerable patients while appealing to wealthy individuals in the society to assist the less-privileged in the society particularly those who are suffering from one ailment or the other and cannot afford to access quality medical attention.

The cleric expressed shock at the sad reality what he saw, saying he could not believe that in a country that has many millionaires most of them accumulating wealth through undue favours from the government or as proceeds of corruption through appointments or contracts, people were still passing through untold hardship.

According to the Islamic scholar, “I have seen the enormous challenges vulnerable patients and their relatives are facing in a society where virtually everything has collapsed despite the increasing number of millionaires that mostly earn such favours or money through the government at all levels and using all forms of corrupt tendencies to accumulate at the expense of the suffering masses.

ALSO READ:  "How Rubbing of Menses On the face Can Cure Pimples", Lady Says

“The situation of the patients in all the two major hospitals is to say the least pathetic and indicting particularly with the increasing number of children including infants mostly that are dying due to preventable and treatable sicknesses such as malaria and typhoid fever.

“Greater number of the patients did not even have money to feed themselves not to talk of affording medical expenses even on severe cases of emergency. Sadly too, emergency cases don’t receive the desired attention while critical medical evaluations and tests that supposed to be done immediately and the result out on time (for patients that have the resources to pay) are being delayed to as much as one and two weeks while decisions in cases of patients that require emergency surgery are being unnecessarily delayed leading to deaths of patients in many occasions according to the testimony of the helpless patients,” he said. 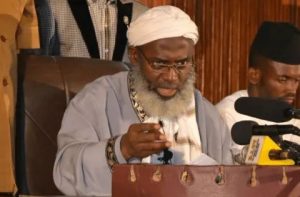 He urged governments at all levels to provide more facilities in public hospitals, make doctors accountable and responsive and provide a means of taking care of the hospital bills of vulnerable patients especially those on critical condition and on emergency cases.

He lamented a situation where millions will be wasted on chartered aircraft to attend wedding ceremonies, unnecessary events or attending children graduation abroad or wasting money on Umrah jamboree at a time when there are more important things to do that will please Allah more, which he said is more rewarding.

Sheikh Gumi further called on both Federal and State governments to declare emergency in the Nigerian health sector, stressing that so much about the condition of the hospitals and suffering patients were not being reported by the Nigerian media.