Failure Comes To My Mind When I Hear PDP, Says Buhari, Give Reasons

Buhari says Failure Comes To My Mind When I Hear PDP

President Muhammadu Buhari on Wednesday said “failure” comes to mind whenever he hears the abbreviation “PDP”.

The president stated this in an exclusive interview with Channels Television.

When asked to give one-liners as last words, President Buhari did not hesitate to state “Failure!” as what comes to his mind when the Peoples Democratic Party (PDP) is mentioned.

Aside from his comment on the country’s main opposition party, there were other teasers for the night including one for Nigerian youths. 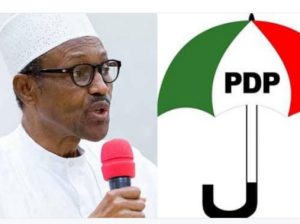 In his response to what he thinks about Nigeria’s young people, Buhari replied that he wishes that “when they go to school; when they work hard; when they have a degree, they don’t do it thinking government must give them a job”.

“You get educated because an educated person is certainly better than an uneducated one. Even in identifying personal problems.

“So, education is not just to hang on to government to give you job and what the colonials indoctrinated on – to have a car, to have a house, and to start work at 8 O’Clock and close at 2 O’Clock,” Buhari explained.

ALSO READ:  2023: There Will Be Religious Civil War In Nigeria If Osinbajo Becomes President — Farooq Kperogi Revealed, Give Reasons

The president had a lot to say within the forty minutes that the interview lasted, including his take on state policing, electoral bill, and the fate of Nnamdi Kanu, the leader of the proscribed Indigenous People Of Biafra (IPOB).

As regards the first, he said, state police is not an option for the nation.

Speaking on the Electoral Act Amendment Bill, the president said he will assent once the National Assembly has made the necessary adjustments such as ensuring that Nigerians can use the direct and indirect primaries to select their leaders with the consensus option not left out.

ALSO READ:  Tinubu Reveals What He Will Do To APC If I Lose Presidential Primary

As regards the fate of the IPOB leader, President Buhari ruled out pardon.

Although he acknowledges the possibility of a political resolution, he believes the IPOB leader must answer for his actions over the years, especially while he was out of the country.

“Nigerians know that I don’t interfere with the judiciary,” the President added. “Let him be listened to. For those who are saying that we should release him, no we cannot release him.

“There is a possibility of political solution; if people behave themselves, all well and good, but you can’t go to a foreign country and keep on sending incorrect economic and security problem against your country and thinking that you will never have to account for what you have been doing. Let him account for what he has been doing.”

The president also expressed his displeasure with the state of electricity in Nigeria, noting that if the nation can get its technology right, the cost of transmission will be reduced and more power will be generated.