Former President Goodluck Jonathan has warned that lack of transparency could result in crises as he makes case for the electronic transmission election results.

Mr Jonathan who spoke at the inauguration ceremony of the National Defence College (NDC), in Abuja, urged Nigerian lawmakers to reconsider the deployment of electronic transmission for the sake of transparency and avoidance of violence.

“Where there is no confidence in the electoral umpire, people resort to crisis. But unfortunately, sometimes when the result comes out, the damage would have been done,” the former president said. 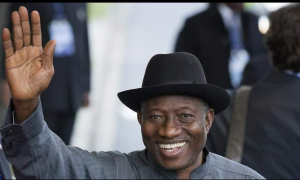 “I urge the National Assembly (NASS), while looking at the law, they should allow the use electronic means of transmitting results for the sake of transparency as well as avoiding electoral crisis,“ he added.

Mr Jonathan’s warning comes a few days after the Independent National Electoral Commission (INEC) accused the National Assembly of being the only blockade to e-transmission of election results.

The commission said it would electronically transmit elections results “if the choice was up to INEC”, reiterating that it has over the years put adequate structures for such in place across Nigeria.

The election umpire had earlier in July expressed its readiness to switch to electronic transmission of election results.

INEC spokesperson Festus Okoye said the commission has since 2018 proven to the National Assembly its capacity to electronically transmit election results across all parts of Nigeria, including from remote areas.

But after months of consideration about whether or not the country should eliminate a crucial channel of election rigging and allow electronic transmission of results, lawmakers of the ruling All Progressives Congress exclusively rejected the proposal in the Senate.

The APC senators said there was no capacity for INEC to transmit results via electronic channels throughout the country, leaving the final decision to the NCC. The move was rejected by opposition PDP senators, who voted entirely in support of electronic transmission of results as a needed improvement to a process long marred by irregularities.

Shortly after the rejection at the senate, APC lawmakers in the House also followed their Senate counterparts to kick against the deployment of electronic transmission, leading PDP lawmakers to stage a walkout of the parliament session in anger.

No Difference Between PDP Delegates And Bandits – Shehu Sani –