The group’s comment came a day after the duo lost in the race to become the presidential flag bearer of the All Progressives Congress.

The ruling APC, on Wednesday, declared Bola Tinubu as the winner of the presidential primary after the former Lagos Governor secured 1, 271 votes.

Amaechi who came second in the contest secured 316 votes while Okorocha got no votes. 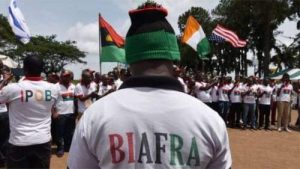 Reacting in a statement, Princewill Richards, leader of Biafra National League urged Okorocha and Amaechi to return home and support the Biafran struggle having been defeated in the APC primary election.

Richards, who is billed for a meeting with stakeholders and former militant leaders in Bakassi Peninsula, on Monday mocked the aspirants adding that they had been disgraced by their northern and western counterpart.

The BnL leader added that an Igbo Presidency was not feasible in Nigeria.

He said Okorocha’s ‘investments’, Rochas Foundation and Almajiri institutions built in the north could not convince Northerners to vote for him, as he stated that the former Imo Governor was excluded before the convention.

He said, “They deceived him with the title of Dan Jikan Sokoto, in order for him to continue his philanthropic assistance to Almajiri. But when it comes to zoning Presidency, they remember he is an Igbo man; they have been disgraced, let them come back home in shame.”

He berated the former Rivers State Governor for spending seven years as Minister of Transportation without taking any federal project to the South-East and South-South, adding that Amaechi tried to please the North by building a standard gauge railway in the region, and a University in Daura.

“Meanwhile, the narrow gauge he started from Ikwerre land to extend to Enugu State has been abandoned following his resignation.”

The BnL insisted that the two political leaders got what they deserved.

“He built standard gauge in the north, up to the Niger Republic, but for his own people, especially the place he came from, he said they should start patch patchwork called narrow gauge. It’s a shame that the political elites will never learn.”

Richards further noted that the North would decide who would become Nigeria’s next President, adding that the Northern Governors had decided the politician that would run for President.