2023 Presidency: what Buhari Told Me – Osinbajo

2023 Presidency: what Buhari Told Me – Osinbajo

Vice President Yemi Osinbajo has revealed what President Muhammadu Buhari told him about the Presidency of Nigeria.

The Senior Advocate of Nigeria (SAN) made the disclosure on Monday when he visited Ondo Governor Rotimi Akeredolu in Akure, the capital.

Osinbajo hailed Buhari for key assigning responsibilities to him since the All Progressives Congress (APC) assumed power in 2015.

The VP further commended the President for his “open mindedness and generosity”, NAN reports.

Osinbajo recalled that as Acting President, he got to know many things that most people will never come across.

“Even people in government will never come across and I gained a lot of experience on that account.

“Many times, the President, when he was away, said pointedly to me that: Look, I don’t want to feter your discretion in any way. 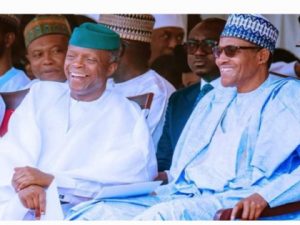 “As Acting President, you are president. Make sure you are fair and just. Don’t refer anything to me, don’t ask me any questions. Just do whatever you need to do.”

Osinbajo added that it would be a betrayal if with all that he has been given by God’s grace, “retire either to Lagos or Ikene and be writing my memoirs”.

2022 Presidency: I Will Govern Nigeria The Way I Governed Kogi If Elected – Yahaya Bello
SECREENSHOT: Drama As Nigerians Send N1, N2, N50 Others, To APC Presidential Aspirant, Adamu Garba After He Publicly Asked For Donation To Pursue His Ambition
Comment