Former Vice-President of Nigeria, Atiku Abubakar, is planning to retain Peter Obi as his running mate if he clinches the presidential ticket of the Peoples Democratic Party (PDP), sources have said.

The duo clinched the PDP presidential ticket in the 2019 general elections although they lost to the ruling All Progressives Congress (APC) which fielded President Muhammadu Buhari as its flag bearer.

It was learnt that some of the governors are picking the presidential forms of the PDP which they plan to use as negotiation for the VP slot.

Meanwhile, Peter Obi also picked the PDP presidential form and has been screened to participate in the primaries.

However, an associate of Atiku revealed that the Waziri of Adamawa had expressed his interest in retaining the 2019 team with Peter Obi as Vice-President if he wins the PDP ticket.

When asked why Peter Obi is running, he said it is because the PDP will throw the presidential ticket open as recommended by the zoning committee of the party.

“Peter Obi is running because the party did not zone the ticket to any region; they will certainly throw the ticket open. Every qualified aspirant will contest and the best will emerge as the candidate of the party. We can’t ask him not to contest since the ticket is not zoned to any particular region.

“What if he wins? If Obi is lucky enough to get the majority of the delegates and becomes the presidential candidate, Atiku and all of us will give him maximum support,” he said. 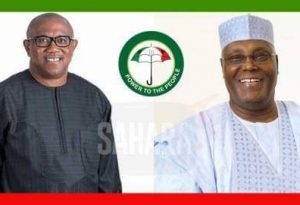 A former member of the party’s National Working Committee who also confirmed the development said while Atiku prefers Obi, he may pander to the wishes of the governors as they are the major power brokers in the party.

“Wike is contesting for the presidency because he believes that if the party zones the position to the South, he would win. But now that the party will throw the ticket open, he has his eyes on the VP slot.

“Another governor interested in the VP slot is Akwa Ibom State governor, Udom Emmanuel. He is also contesting for the presidency but his motive is just to join the race since Wike from Rivers is also there.

ALSO READ:  WATCH: God Will Punish Us If We Don’t Support Him, Says CAN Chairman

“There is this age-long rivalry between Akwa Ibom and Rivers and so they believe if a man from Rivers wants to become president, why can’t a man from Akwa Ibom also do it?”

“The primary is yet to be conducted but there is this belief in the party that with President Buhari out of the equation in 2023, only Atiku has a national appeal that can win the presidential election for PDP.

“In fact, Bala Mohammed of Bauchi said he is contesting for president but he has secretly obtained a nomination form for the governorship election. Is that a serious presidential candidate? So right now, they are already working towards the emergence of one of their own as running mate to Atiku.

“They also know that Atiku prefers Obi because they have a close working relationship. In fact, that was why Obi attended Atiku’s declaration in Abuja.”