Following the controversial unveiling of Pastor Umo Eno as the “preferred successor” by the Akwa Ibom State Governor, Udom Emmanuel, there is currently disquiet in the state as more facts emerged on how the endorsement deal was brokered and sealed.

Governor Emmanuel on Sunday, unveiled his successor in a meeting which had former Governor, Victor Attah, few National Assembly members, party leaders and some religious leaders in the state in attendance, known as “Fathers of Faith.” 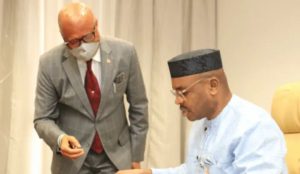 The purported unveiling had caused disaffection within the ranks of the party as many were said to be ready for showdown.
A member of the House of Representatives and governorship aspirant, Luke Onofiok, had reportedly stormed out of the meeting, denouncing the endorsement.

ALSO READ:  VIDEO: Islamic Cleric Caught Sleepíng With A Mad Woman And Wiping Her Priv@tès With An Handkerchief

A source disclosed that members of the State Party Executive of Peoples Democratic Party were taken aback by the decision and considered the action of the Governor as ill-advised and reckless, capable of destroying the party ahead of 2023 general elections.

“We were not consulted nor informed about the so-called stakeholders meeting. The governor just summoned few people and cajoled them to anoint the man without regard for party hierarchy and nomination processes,” a source said.

It was gathered that the governor allegedly also financially induced former Governor Attah to lead the move for the controversial endorsement. The former Governor has been in serious financial distress with his Abuja residence allegedly set to be forfeited.

The mansion located at Haile Selassie Street, Asokoro had been placed under seizure following a valid court order by a Federal High Court delivered on 29th September 2021.

Sources said the governor offered to bail out the former governor with millions of naira of tax payers’ money in exchange for the official endorsement of his Commissioner of Lands and Water Resources, Pastor Umo Eno.

“The former governor accepted the offer and agreed to lead the delegation to the meeting,” another source said.

SaharaReporters had on September 24, 2021 reported how the governor also lavished tax payers’ money on the thanksgiving service in honour of Eno as his candidate in the 2023 general election.