The Muhammadu Buhari-led Nigerian government has asked the United Kingdom government to confiscate the assets of the Indigenous People of Biafra, “shut down their communication channels and sanction the issuance of visas to IPOB funders in Nigeria.”

The United Kingdom Visas and Immigration office in its May 2022 policy update said, “IPOB is proscribed as a terrorist group by the Nigerian government, and members of the group and its paramilitary wing – the Eastern Security Network (created in December 2020) – have reportedly committed human rights violations in Nigeria.

“If a person has been involved with IPOB (and/or an affiliated group), MASSOB or any other ‘Biafran’ group that incites or uses violence to achieve its aims, decision-makers must consider whether one (or more) of the exclusion clauses under the Refugee Convention is applicable.

“Persons who commit human rights violations must not be granted asylum.”

The Nigerian government in its statement issued by presidency’s spokesman, Garba Shehu, said the UK’s stance was a welcome development and should be followed up with appropriate actions. 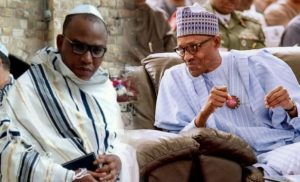 Shehu said, “Nigeria welcomes the decision by the United Kingdom to proscribe the Indigenous People of Biafra (IPOB) as a terrorist group. The violent secessionist organisation has long been proscribed as such in Nigeria where it carries out the majority of its murderous activities.

“It has taken our allies in the U.K. so long to follow suit owing to two reasons: first, the deep pockets of IPOB’s international network of funders that allow for lawyers and influence peddlers to aggressively lobby for and whitewash the activities of their client in Western courts; and second, IPOB’s influential communication network of TV and radio stations – including London-based Radio Biafra – employed with great effect to spread misinformation abroad and incite violence at home.

“The next steps are clear: now that IPOB has rightly been designated a terrorist group, the UK authorities should, in our view, follow up with confiscation of their assets, shut down their communication channels and sanction the issuance of visas to IPOB’s funders in Nigeria.

“Such sanctions have played a critical role in combatting other terror groups. And make no mistake: today Africa is a breeding ground for terror, with local and international groups alike gaining strength across the continent, thriving on the economic devastation of the pandemic.

“Nigeria’s intelligence and security forces are the first lines of defence against such groups, including ISIS and Al Qaeda affiliated Boko Haram. We rely on our allies in the West for their support. IPOB’s – and its 50,000 strong paramilitary unit’s – reign of terror has seen villages butchered, school buses set alight and politicians’ homes bombed. Through their international network of radio and TV stations, they threaten further violence if their demands are not met, while inciting violence and religious and ethnic tension between Nigeria’s Christian and Muslim populations.

“Their mouthpieces and their wallets are their most effective tools – it is these assets Nigeria’s allies must target next. And there is no time for complacency. We thank the U.K. for its decisive action and call on our friends in the U.S. to at last heed our calls and follow suit in designating this murderous terror group as what it is. Across Africa, Increasingly what were once small localised groups are growing in size and influence and becoming connected to global networks of terror. The free and democratic world must act now to stomp them out before any more misery is caused.

Igbo Man Drag US Varsity, Lecturer To Court Over Call On America To Designate IPOB As Terrorists Group, Demand $3Million As Damages