A “confused” and “broken” Ghanaian man is seeking help on what to do as his wife has been beating him for the past three years at the least provocation.

According to him, they have “been married for five years and we have a set of 4year old twins”.

In a letter addressed to Jessica Opare-Saforo who hosts Citi FM/Citi TV’s Sister Sister Show, the man said: “I provide financially, I spend time with my kids, I try as much as possible to make them happy.”

However, the only things he gets in return are physical and verbal abuse which he has not voiced out to anybody due to the shame it might bring to him.

His trouble only began when he became suspicious that his wife might be cheating on him with another man, and confronted her.

He disclosed that she has even pulled a knife on him before and sometimes pelts him with objects.

Read the full letter below as posted on Sister Sister’s Facebook page:

Hello sisters, my problem is a touchy one. I can’t talk to anyone close to me about it for fear of being ridiculed. Sisters, my wife for the past 3 years has been hitting me. We’ve been married for five years and we have a set of 4year old twins.

I do everything expected of a man in the home. I provide financially, I spend time with my kids, I try as much as possible to make them happy. 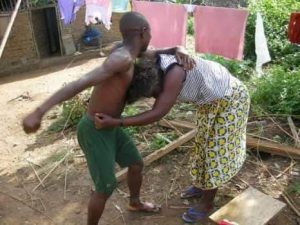 3 years ago my wife joined a social club where they go out and have fun and engage in other social activities. Initially, I had no problems until I got wind of her closeness with a particular guy in the group. I raised my concerns about this friendship and all hell broke loose.

ALSO READ:  Lady In Tears On Facebook Over Failure To Locate Husband Before December Deadline -

Sisters, she slapped me! And ever since then it’s like I unleashed a monster. From throwing things at me to even pulling a knife on me one time. My question is if she doesn’t have anything to do with that guy, why the abuse? I was raised never to hit a woman so I’ll never hit her back but right now I’m confused.

How did the woman who swore to love me till death suddenly change and hate me so much that she’ll choose another man over me and further keep hitting me at the least opportunity? Please help this confused broken man.

Nigerian Man Disappears After His In-laws Gave Him Bride Price List Of N2.5m –

Panic As RCCG Refuses To Wed Couple For Hugging In Pre-wedding Photo –
Boko Haram Gives New Order, All Men To Marry Off Their Daughters At 12 Years
Comment