Jews Prosper Because Of The Followings — Pastor Adeboye Reveals 2 Things

Pastor Adeboye says Jews Prosper Because Of The Followings

The General Overseer of the Redeemed Christian Church of God, RCCG, Pastor Enoch Adeboye has attributed the prosperity of the Jews to their obedience to the laws of tithing and first fruit.

He made the submission at the ongoing yearly congress of the church monitored by Church Times on Wednesday, December 8.

Adeboye said statistics show that 50 percent of the millionaires in the United States of America are Jews even when it is clear that the Jews are just about 2.6 percent of the population of the US.

ALSO READ:  Sokoto Female Student: She Deserves Death, There Is No Doubt About It, Popular Islamic Scholar, Gives Reason

He also observed that 20 percent of the 900 Nobel laureates in the world are Jews. 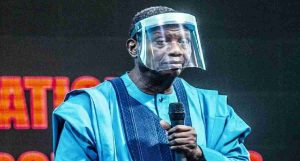 He insisted it could only have happened because they obey the laws of tithing and payment of their first fruit.

He said many people who kick against tithe and first fruit do so on the basis of their claim that it is an old testament law.

But he argued that the same people who say it is an old testament law also take advantage of other scriptures like Psalm 23.

“When it comes to those scriptures they don’t say it is old testament. But even at that if we are Christ, we are called the seeds of Abraham. Abraham paid tithe long before the law, what stops us from doing same,” he said.

The Igbo Are The Richest In Nigeria And Most Intelligent, But Why Do They Want A Nation Of Their Own?, Ben Bruce Blows Hot
Jews Prosper Because They Pay Tithe, First Fruit, Others — Says Adeboye /
Comment