Omobolanle Adenle is one of the graduates at the 45th Convocation of the Obafemi Awolowo University held earlier this month.

She gained admission to study Linguistics and African Languages in 2010, but instead of graduating in the 2014/2015 session, she graduated in 2021.

While narrating her ordeal to Punch, Adenle who is now an entrepreneur, said her challenges started from the first and second semesters spent on the OAU campus.

She said, “A journey that started in 2010 and finished in 2021. I thought I would finish with my mates in the year 2015 when I obtained admission to study Linguistics and African Languages in Obafemi Awolowo University in 2010, but my first and second semesters’ results were nothing to write home about after putting my best foot forward. So, I got discouraged.

“I thought I would obtain JAMB (Joint Admissions and Matriculation Board) and change my course the following year which I tried but failed again, so I made up my mind to finish what I’d started but it was almost late already.

“I couldn’t handle retaking courses and doing my main courses altogether, but I did it anyway and it was a disaster throughout – but I just couldn’t quit and it saddened my heart at that time.

“I felt like a total failure in life and everything academics saddened my heart then till I decided to find another interest that would fill up the grief I nursed in my heart daily.”

After the “failed” semesters, Adenle had to start a business to raise money for survival.

This time, she said, the move was successful as she was able to settle many bills, including school fees on her own.

She continued, “I decided to explore the business world with my almost collapsed academics then because I needed to start generating some extra income to sort out my school bills and my general well-being.

“My business became the only get away from the deep sadness I nursed on my academics, I finally found fulfilment beyond the four walls of the classroom – buying and selling different products and services.

“I became a professional at selling anything sellable on this earth and there’s no product or service under heaven that I can’t sell with ease and speed right now as a product manager and Digital Marketer, I mastered the art of selling from hawking different products after classes to my fellow students in female hostels in OAU.

“I was actively investing in myself beyond the four walls of the school while pursuing academics, I became so good in my craft that I won a business grant in 2018.

“I became a business mogul with two physical stores in Lagos State and Osogbo, Osun State till I shifted my focus to more of digital product recently and required no physical location in Osun State anymore.”

Determined to be a graduate, Adenle returned to the academic world but failed again.

She narrated that she sailed through different hurdles before being allowed to complete her studies.

At the point, she had retaken all the failed courses, one of her results was said to be missing again.

She said, “I was supposed to have an extra year to sort out all the courses I failed, but I failed again and had to come back again to retake some of the courses but I chose not to come back, I was tired already and told my part adviser that I was done with school and I wanted to travel out because I was frustrated.

“I came back the following year after a year break and paid dearly with several medical reports before I was allowed to retake the courses two years later. And when I thought I was finally done to be fully cleared from OAU, one of my results got missing, an elective for that matter, and for over a year we were on it till I finally gathered the courage to retake it after which it was found after retaking the course.

“The shame was unbearable when every year that I thought I’d be done left me hanging and then I learnt patience, persistence, doggedness, and how to trust God with my life exclusively.”

According to Adenle, her ordeal taught her to believe in the divine set and never to be hard on herself.

JUST IN: Dangote, Otedola, Others To Pay Off ASUU – 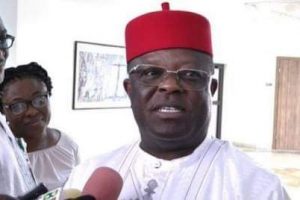 ASUU STRIKE: University Education Not For Everybody – Governor Umahi –

Screenshot: Sylvester Oromoni’s Sister Shares The Message She Received From One Of The Alleged killers Of Sylvester
Female Student Who Was Reported Missing Found In Her Boyfriend’s House –
Comment