There are strong indications that the National Assembly and the Independent National Electoral Commission may clash over the mandatory direct primary proposed in the 2010 Electoral Act (amendments) Bill 2021, for all political parties in the country.

The Chairman of INEC, Prof. Mahmood Yakubu, had while defending the agency’s 2022 budget before the joint Senate and House of Representatives Committees on INEC and Electoral Matters on Friday, described the cost of monitoring party primaries conducted by direct method as enormous.

He had said that the N619m the agency already proposed for the monitoring of party congresses and campaign activities in 2022 would be a far cry if all the parties would be mandated to conduct primaries, using direct method.

He had said, “I am not sure it would be adequate. We are monitoring party congresses and primaries right from the ward levels by direct means.

ALSO READ:  Why I Slumped After Buhari Sacked Me - Ex-Minister Of Power, Mamman Reveals -

“We have 8,809 wards and 18 political parties are involved. We have five types of elections–presidential, senatorial, House of Representatives, governorship and states constituency primaries. If they would be done by direct means, we have to make preparations.

“We have 993 state constituencies, so, if parties are going to nominate their candidates we are going to monitor in all the locations.

“There are 109 senatorial districts, 360 House of Representatives and 28 governorship elections because eight are being conducted off season.

“We will monitor party primaries for the nomination of candidates in over 1, 400 constituencies so the cost would be enormous.”

However, the Chairmen of both the Senate and House of Representatives panels on INEC and Electoral Matters, Senator Kabiru Gaya and Aisha Dukku, said INEC had no choice but to do according to whatever the Electoral Act dictates, when signed into law.

They spoke with our correspondent after the budget defence session on Friday.

Gaya said, “The report of the joint National Assembly Conference Committee on Electoral Act is ready. It won’t take much time before it is passed.

ALSO READ:  Buhari May Not Return From UK,  See Reason 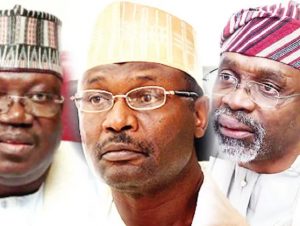 “The INEC Chairman has not said he can’t monitor party primaries conducted through direct method. Don’t put words in his mouth. I didn’t hear him say so.”

Dukku on her part said, “The bill is still a work in progress. We would lay the report before the House and once it is passed and cleaned up, it would be sent for Mr President’s assent.”

Both Gaya and Dukku also refused to confirm or deny if state governors were mounting pressure on them to rescind their decision on the compulsory direct primary elections for all political parties.

The two chairmen said, “Direct your questions to the governors, not to us.”

We Are Satisfied With Amended Electoral Act, INEC Tells Buhari, Give Reasons –