NBA Useless, Only Good For One Thing – Wike Blows Hot

Wike says NBA Useless, Only Good For One Thing

Governor Nyesom Wike of Rivers has criticised the Nigerian Bar Association (NBA) for failing to act as President Muhammadu Buhari’s regime “becomes more notorious” for abusing the rule of law.

In a statement by his media aide Kelvin Ebiri, the governor expressed regrets at the NBA’s lacklustre approach to social change, saying it is more of a disservice to the nation and exposes it to contempt.

“It is quite unfortunate that the NBA is only good at issuing statements of condemnation without more, while the judiciary continues to suffer ferocious bouts of harassment from a federal government that has become notorious for its contemptuous attitude towards the rule of law and the rights of Nigerians to an effective justice system,” Mr Wike asserted.

The Rivers governor advised NBA to go beyond issuing statements to taking concrete actions against attacks on the nation’s judiciary.

Mr Wike spoke during the book presentation in honour of Justice Mary Odili as part of activities marking her retirement from the Supreme Court and her 70th birthday celebration in Port Harcourt. 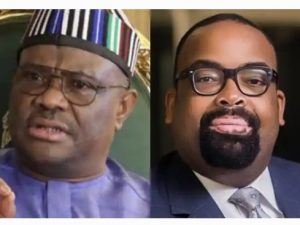 He disagreed with some speakers, who blamed politicians for the judiciary’s challenges during a valedictory court session organised in honour of Mrs Odili.

The governor alleged that Mr Buhari’s regime had in 2016, unleashed premeditated midnight raids on judges’ homes, including the justices of the Supreme Court, in Abuja, Port Harcourt, Gombe, Kano, Enugu and Sokoto.

Mr Wike assured that if elected the president of Nigeria in 2023, he would work with the National Assembly to prioritise the welfare of judicial officers, including the provision of official cars and life-long accommodation “as being done in Rivers.”

Mrs Odili, a former justice of the Supreme Court, noted that Nigerian judges were among the best globally, but they were not treated well at home.

Mrs Odili, who was also the first lady of Rivers, between 1999 and 2007, expressed delight that some of her judgments had been published for the public to assess.