JUST IN: 54-Year-Old Woman Gives Birth To Her Own Grandson

54-year-old Australian woman, Maree Arnold has given birth to her own grandson after her daughter Meagan White, 28, was diagnosed with Mayer-Rokitansky Küster-Hauser syndrome (MRKH) when she was in her teens; a disorder that means she was born without a uterus.

Meagan, who is now Australia’s oldest surrogate, feared her dream of having a child of her own would never be a reality, after her baby girl, carried by a Canadian surrogate, passed away at 21 weeks.

But after doing some research findings Maree discovered that she could step in and act as a surrogate. To the delight of everyone, on January 13, 2022, Maree gave birth to a healthy baby boy, Winston.

‘Having Winston in our arms is a dream come true.

‘When we first saw him, it was love at first sight. He has filled out hearts in a way we never knew possible.

‘The C-Section was planned months ahead and the birth went entirely to plan. We arrived at the hospital at 7am and had him in our arms at 9am, it was perfect.

‘We were both present for the birth. Not nervous but just excited, our doctor was fantastic, informative, and calming.

‘Winston is thriving, he is relaxed, alert and pure perfection.’

When Meagan and her husband Clayde lost their first child while she was being carried by a surrogate, they say they lost all hope.

‘Everyone was heartbroken, and after that I just felt like giving up,’ she said. ‘Then once the pandemic began, overseas travel was prohibited, so everything felt impossible.’

Maree was given drugs to thicken her uterus lining and reverse the menopause process to prepare her body for pregnancy.

Mum-of-five Maree, who runs her own farm, said:

‘I always just assumed I’d be too old to do something like this, but it just goes to show you always need to ask questions.

‘It is such a special experience for me and I’m over the moon to be able to help my daughter.

‘I think there are different ways people get pregnant these days, and this is just another option.’

After three failed embryo transfers, Meagan and Maree said they both began to feel a bit defeated and thought perhaps the process was not going to work.

But thankfully, the fourth transfer was a success, and now baby Winston has been born

‘I know that I was obviously older with this pregnancy, and I did get a bit more tired than when I was last pregnant 22 years ago,’ Maree said.

‘But I was still up and about, mowing the lawns and doing this around the house. I felt great.

‘Now that it’s all over I think I’m relieved it all went so well and just amazed at this little human we have made.

‘My first cuddle was super special and one I will never forget.

‘Little Winston is everything we could ask for and more. He has made our family. It’s just wonderful to see Meagan and Clyde so happy.

‘I just hope our story will encourage someone else to take the same journey as we did.

‘It’s a very rewarding thing to do, and if I had my time back, I would definitely do it all again

We Begged Our Husbands To Leave Our Breasts — Housewife Cries Out, Gives Reason – 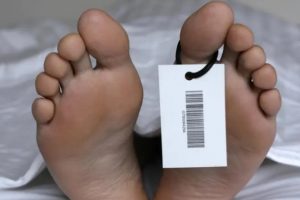 Tension In Nassarawa As Son Kills Dad Over Land –