President Muhammadu Buhari, on Tuesday, stated that security forces have ramped up combat against bandits and terrorists who have held Nigerians hostage recently.

“We have directed the military to crush those terrorising our citizens, peace and

security is gradually being restored to the country,” the president said.

“In the past couple of days, you must have

heard about the number of terrorists neutralised by the military, and number of hostages freed,” Mr Buhari added at the Citizens Summit for National Integration, Peace and Security on Tuesday in Abuja.

The summit was convened by the Nigerian Institute of Public Relations and Partners, with the theme,” Reopen Conversation, Rebuild Trust.”

The president was represented at the event by the Minister of Information and Culture, Lai Mohammed.

He said just as his regime has been able to put the seemingly-intractable farmers-herders crisis under control, it would also successfully tackle the terrorists and bandits.

“As our security agencies put them on the run, they will no longer be able to carry out their

deadly attacks as well as kidnappings.

“Peace and security will return to our country, and our unity will be strengthened.

The president said that these efforts will not stop, or reduce, adding ”We must take the fight to the terrorists and demonstrate that there is no hiding place for them within the borders of our country.

“Each one of them will be hunted, and pursued and spoken to in the language that

they understand,” he added.

Mr Buhari, who commended gallant men and women in uniform, appealed to all compatriots to continue to support them in their onerous task of keeping the country safe.

“We must also realise that security is the business of everyone, hence the

tagline ‘if you see something, say something.’

“Terrorists or bandits are not spirits. They are human beings and they reside in ourc communities

“They must all be exposed and crushed for peace to reign,” he said 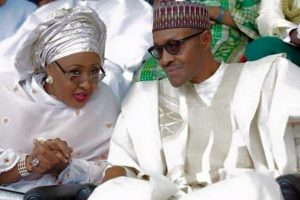 My Husband Regime Is Not A Perfect One – Aisha Buhari Begs For Forgiveness, Tells Nigerians What To Do Over Insecurity And Hardship