There is commotion at the national secretariat of the All Progressives Congress (APC) in Abuja, as a group of youths have stormed its premises, chanting slogans against the party’s national chairman, Senator Abdullahi Adamu.

The youths said to be from Kogi State stormed the party’s headquarters while a meeting of the National Working Committee (NWC) was in progress. 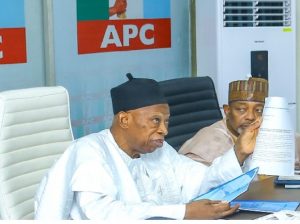 They alleged that the ticket of their principal who won a House of Representatives race was given to another person.

While the youths were threatening that Adamu would not get out of the secretariat, the security operatives rushed and locked the entrance gate.

Following the development, the security operatives pushed journalists out of the secretariat.

However, they (journalists) were later asked to identify themselves for security reasons before they were allowed to settle down.