Bandits have killed a herdsman, Ado Mamman, at a settlement in Pai community, Kwali Area Council of Abuja.

A resident of Pai community, simply identified as Shehu, said the incident happened around 11:12 pm on Sunday.

He said the bandits wielding sophisticated weapons broke into the Fulani settlement while the occupants were preparing to retire for the day. 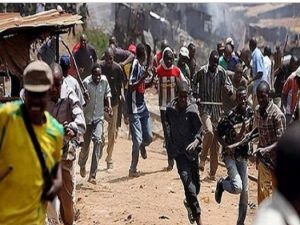 He said the deceased herder was shot on the chest while trying to resist them from whisking his kinsman away.

“It was the sporadic gun shot that even attracted the attention of the villagers, until about 4:am this morning when it was discovered that bandits killed one of the herders and whisked away one other person,” he said.

The abducted herder was identified as Maude Ado.

Usman, who said he was alerted at about 6:12 am on Monday, added that the deceased had been buried.

“But as I speak to you, a contact is yet to be established from the abductors of the man,” he said.

The spokesperson of the FCT police command, DSP Adeh Josephine, did not reply to a text message sent to her about the latest kidnap incident.

BREAKING: Fire Burns Many People To Death In Bauchi –

Burna Boy Sent Someone To Me 3 Times, I Rejected His Advances Before My Partner And Friend Were Shot, Says Woman Whose Friends Were Shot
VIDEO: Native Doctors Display Charms On Anambra Highway To Wade Off Gunmen, Kidnappers, Others
Comment