The presidential candidate of the Peoples Democratic Party (PDP), Atiku Abubakar, says he wished to be known by his current name and not by his West African School Certificate which carries the name “Siddiq Abubakar.”

According to documents displayed by the Independent National Electoral Commission (INEC), Atiku did not provide information on his primary education.

The 1965 West Africa School Certificate (WASC) result presented by him identified the student as Siddiq Abubakar.

He also holds a Master’s degree in International Relations from Anglia Ruskin University in the United Kingdom.

From the documents, SaharaReporters observed that Atiku earned a Master’s degree in 2021 with GCE O’level results.

Reacting, a public affairs analyst said it was baffling and shocking that Atiku earned a Master’s degree in 2021 with GCE 0 level results.

“I would like to know how Atiku with zero academic or creative publications and with zero college level courses suddenly earned a Master’s degree? And the year 2021 is suspect. He quickly scammed Nigeria with a degree he obtained in 2021 because of the presidential election. 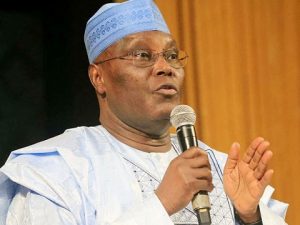 “Before someone without a Bachelor degree could earn a Master’s degree, he must have distinguished himself academically or in his field of endeavours by showing publications or unique writing samples.

ALSO READ:  Another Nigerian Governor Swears In Wife As Judge -

“For example, a playwright called Nilo Cruz (Cuban-American playwright) was accepted into Brown University MFA in playwriting program in the early 1990s without a bachelor’s degree. But he earned Associate degree from Community College and distinguished himself as a talented playwright with numerous plays.

“And he was recommended into Brown MFA In playwriting program by another scholar/ playwright who had taught Nilo Cruz before.”

Documents displayed by INEC and sighted by Nigerian Tribune showed that apart from the presidential candidate of the All Progressives Congress (APC), Bola Tinubu and his running mate, Kabiru Masari, whose claim of loss of certificates continued to generate interests across the country, the vice-presidential candidate of the Peoples Democratic Party (PDP), Dr Ifeanyi Okowa, also said his secondary school certificate is lost.

The presidential candidate of the Action Democratic Party (ADP), Sani Yabagi, also submitted an affidavit saying that the name on his degree and West African School Certificate is different from what he currently bears.

It had been reported that the Delta State governor and vice presidential candidate of the PDP, in a sworn affidavit attached to his particulars disclosed to INEC that his West African School Certificate obtained in 1974 was missing.

ALSO READ:  REVEALED: How Woman Who Claimed She Birthed 10 Babies Lied, She Was Not Pregnant, Full Details

The affidavit of loss of original certificate, obtained from the High Court of Justice, Delta State, in the Asaba Judicial Division on October 3, 2006 reads in part: “I, Ifeanyichukwu Arthur Okowa, adult, male, Christian, medical doctor and Nigerian citizen of House No. 4, Commissioners’ Quarters, Asaba, Delta State, do hereby make oath and state as follows:

Also, in the affidavit sworn to at the Federal High Court of Justice, Maitama, Abuja, on June 3, 2022, the YPP presidential candidate disclosed that on July 17, 2021, while in transit from Kaduna to Abuja, he lost certain documents which included “original BSc certificate issued by American College of Los Angeles, dated 1988; High School Diploma issued to me by Langley High, Norwich, UK dated 1979 and official degree transcript.

“Also lost was expired international passport issued by Nigeria Immigration Service. That all efforts made to trace the said documents have proved abortive.”